Viral Load of SARS-CoV-2 in Respiratory Aerosols Emitted by COVID-19 Patients while Breathing, Talking, and Singing

Kristen Coleman, PhD, led a group of researchers from the National University of Singapore and National Centre for Infectious Diseases in studying the detailed role of aerosol particles in the transmission of SARS-CoV-2. Their resulting paper, titled “Viral Load of SARS-CoV-2 in Respiratory Aerosols Emitted by COVID-19 Patients while Breathing, Talking, and Singing” was published online last month in the journal Clinical Infectious Diseases. 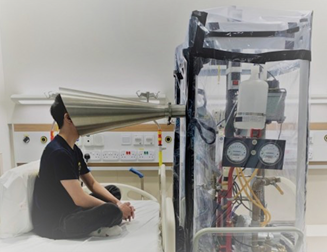 NUS collaborator and researcher, Douglas Tay, demonstrates how the Gesundheit II breath collector is set up in patient rooms (Image from published article)

Dr. Coleman and her team used a Gesundheit II (G-II) machine invented by Professor Donald Milton at the University of Maryland to measure the viral loads in respiratory aerosols emitted by COVID-19 patients. The G-II breath collector enabled the researchers to capture viral RNA in both fine (≤ 5 μm) and coarse (> 5 μm) respiratory aerosols emitted by 22 patients while they breathed normally, talked, and sang into the device at timed intervals. Participants were asked to repeat passages of a children’s book and sing common American children’s songs. By drawing air from around the patient’s head into the machine throughout the testing period, exhaled particles were pulled into the sampling environment rather than dissipating into the room.

Coarse and fine particles were examined separately with reverse-transcriptase quantitative PCR (RT-qPCR), using a positive control plasmid to set a standard curve for viral RNA particles. With this approach, the team detected SARS-CoV-2 in samples from 13 patients, including both asymptomatic and pre-symptomatic participants. They also found that participants who had been infected for less time were more likely to exhale higher levels of SARS-CoV-2 RNA. The two highest emitters were on Day 3 of their illness. Importantly, the majority of the RNA copies detected in this experiment (85.4%) came from fine particles rather than coarse ones, and overall, more RNA was released when participants were talking and singing, compared to simply breathing. Though the researchers were not able to successfully culture the virus, this study provides important information as to the role that fine aerosols play in SARS-CoV-2 transmission. They also note that only one study participant was found to be infected with the highly transmissible SARS-CoV-2 Delta variant, thus more research is urgently needed to study Delta and other emerging variants.

Given these findings, the study authors advocate for the continuation of infection control measures such as wearing proper, tight-fitting masks, ensuring adequate room ventilation and air filtration, and reducing crowding to minimize the spread of SARS-CoV-2 from fine aerosols. These actions are especially important in indoor settings where people frequently gather and spend time, such as schools.