Lower respiratory tract infections (LRTI) are thought to cause more than 4 million deaths annually, making them one of the most concerning forms of infectious diseases globally. Children under 5 years of age are especially at risk of these infections, and understanding the epidemiology of the viruses causing their infections is an early step towards prevention.

In an article published in the Asia Pacific Journal of Pediatrics and Child Health, Jakie Ting collaborated with Malaysian and American Duke One Health Team members to review medical records of young children in Sarawak, Malaysia who had previously been enrolled in a cross-sectional surveillance study of viral respiratory infections. In this initial study, nasopharyngeal swabs were obtained from hospitalized children presenting with pneumonia-like illness and studied for the presence of commonly circulating respiratory viruses, including respiratory syncytial viruses (RSV), adenoviruses, coronaviruses, enteroviruses, parainfluenza viruses, and influenza viruses. Of 385 children, 222 (57.7%) were positive for at least one virus and 196 qualified for inclusion in the current study.

Medical records of participating children were reviewed for course of disease, and treatment plans followed according to the viral pathogens identified within the nasopharyngeal swab samples. Children with LRTI-related hospitalizations typically showed symptoms of coughing, high fever, rapid breathing, and reduced energy and appetite, yet length of hospital stay and need for supportive therapies varied greatly among study participants.

Among the participants included in this study, RSV was associated with most infections (54.1%), followed by adenoviruses (24.0%) and influenza A viruses at (22.0%). 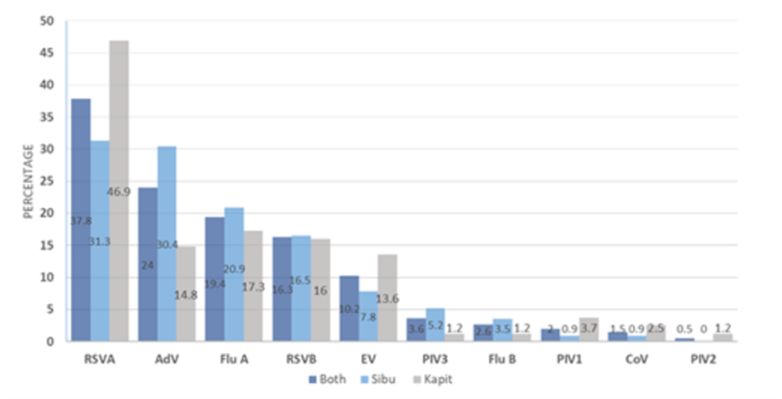 Consistent with previous studies, children with nasopharyngeal swabs positive for adenoviruses had longer lengths of stay and greater needs for nebulization, oxygen therapy, and intubation than those with evidence for other respiratory virus infections. The rate of co-infection within the study population was high, with 17% of participating children having evidence of multiple respiratory viruses present in their samples. This was primarily found to be the case with parainfluenza virus 1, adenovirus, enterovirus, and RSV B infections.

Understanding the burden of disease, including seasonality and severity of various respiratory viruses in a population can improve clinical outcomes, especially for children under five, while reducing the misuse of targeted drug therapies, making this an important area for continued epidemiological research.

The full article can be read here.

The earlier study of viral causes of pneumonia can be found here.