Large-scale farms with high volumes of animals are extremely liable to infectious disease outbreaks and zoonotic transmission. The H1N1 “swine flu” pandemic in 2009 emphasized the importance of animal surveillance for emerging pathogens. To better understand the microbial presence on some of these farms, Drs. Emily Bailey and Akshaya Ramesh guided metagenomic sequencing on nine swine slurry, two bioaerosol, and one surface swab sample gathered from two farms in the United States. Their findings were published in the journal Nature, in a report entitled “Metagenomic characterization of swine slurry in a North American swine farm operation”. The richness in microbes in this exploratory pilot study was simply astounding!

A total of 270 microbial genera from the slurry samples were distinguished from host sequences, including organisms from the bacterial, eukaryotic, viral, and archaea kingdoms. Researchers chose to focus most of their attention on identifying diversity among the viral family, which made up only 4.04% of sequences isolated from the slurry samples. 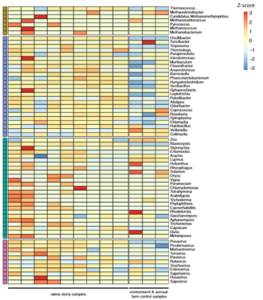 Top 25 most abundant genera within each kingdom identified in the slurry samples.

The team assembled 1792 viral genomes, of which 554 were novel. The most prevalent genus was Picobirnavirus, with 538 novel genomes identified from among 1637 assembled genome segments. Researchers additionally identified 10 new viruses classified as porcine Statoviruses, which have previously never been isolated from pigs. For the Picobirnaviruses, a total of 638 RNA-dependent RNA polymerase segments and 1033 capsid/ORF segments were assembled from the slurry samples while no viral genomes could be assembled from the environmental samples.

The second most prevalent viral group identified from the slurry samples were Posavirus, followed by Porcine astrovirus, Sapelovirus, and Enterovirus. In addition to these discoveries, researchers noted the ability to use metagenomic sequencing to identify antimicrobial resistance genes among the pathogens.

This study demonstrated the incredible microbial biodiversity in swine slurry and demonstrated how periodic metagenomic sequencing studies of swine fecal slurry samples might be employed in the future to detect novel zoonotic pathogens and identify antimicrobial resistance before they become wide spread.