Epidemiologists Sylvia Xiao Wei Gwee and Dr. Junxiong Vincent Pang of the National University of Singapore partnered with Dr. Ashley St. John of Duke-NUS and Dr. Gregory Gray of Duke University to review 3,818 articles related to dengue infections in animals. Of these, 56 articles were included in the One Health journal publication, entitled “Animals as Potential Reservoirs for Dengue Transmission: A Systematic Review.”

The authors note that dengue infections have been identified in human populations in 128 countries, with an estimated 390 million annual cases of which only 25% appear as symptomatic. Though many dengue interventions focus on controlling mosquito populations as known vectors of the virus, less attention has been placed on the potential of non-primate species to serve as reservoir hosts.

Following PRISMA guidelines, this systematic review identified peer-reviewed observational, seroprevalence, cross-sectional, and case-control studies that carried out direct dengue or flavivirus testing on various animal groups. A total of 18 studies were performed with bats, 22 with non-human primates, 9 with birds, 6 with bovids, 5 with rodents, 4 with horses, 3 with pigs, 3 with marsupials, and 2 with dogs, with evidence for infection identified in at least 84 species of 23 animal types. Non-human primates, pigs, and bats appear the most likely to be infected by dengue virus, though evidence is limited as to their ability to serve as reservoirs rather than dead-end hosts.

The full systematic review can be found here. 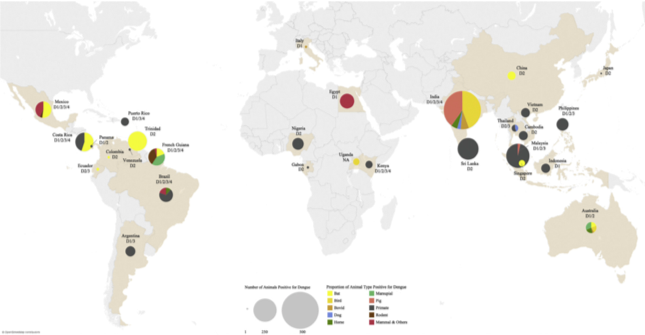